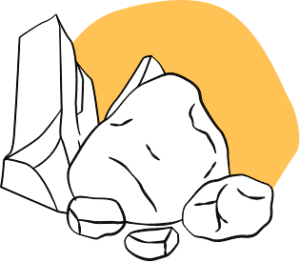 Disperse caco3 is a suspension of caco3 particles in water with the help of dispersing agent.

Talc is a mineral and a hydrated magnesium silicate. Its rock is slippery in nature and very soft in nature..

Celestine is a mineral consisting of sulphate strontium (SrSO4). Its name derives from the Latin word Caelestis,

Chalk is a sedimentary rock of non-clastic carbonate, which is a type of limestone composed of the mineral calcite. Shaheen provide an exceptional..

The Dolomite is a sedimentary rock based mineral rich in magnesium and calcium carbonate. It also has many other minerals in smaller quantities.

To maintain the highest standard of quality, we pay main attention to our products to ensure that they meet the specified requirements. Keeping in view the environmental constraints, we do our best to produce best quality powders.

Our products used in synthetic leather mainly have the effect of filling, reduces the cost of material, and changes the product hardness and performance.

We produce specialized products that are used in plastics and fertilizers can increase the volume and weight of products while improving performance and minimizing the cost.

The products that we manufacture for papermaking have modifier absorbent properties with high whiteness and uniform particle size distribution.

The products utilized in the making of rubber have functions of reinforcing, filling, coloring, making the rubber easy to disperse and mix.

Our supply of calcium carbonate used for PVC filler of cables and wire production hold the features of insulation and fire retardation.

The products that we supply for the preparation of sealants are capable of accelerating the cross linking reaction of adhesive and enhancing the dimensional stability.

Shaheen serves a wide range of industries from cables to paints and coatings.

Have any questions? We’d love to hear from you.

“Leadership is the capacity to translate vision into reality.” Warren G. Bennis

Mr. Chaudhry Iftikhar Bashir is the visionary leader who has always led the company through challenging times by putting in hard work and providing the key leadership Shaheen required to grow into the trusted brand it is today. With his interest vested in the industry, he started working part-time at the factory at a very early age during the late ’70s. Later he officially joined in 1980 and drove the company towards growth. Key clients such as Panther Tire, PVI/ATS Synthetic, Diamond Paints, and many others joined hands with him. Truly ambitious he visited UK, Germany, France, Spain, Sri Lanka, Malaysia, China, and Saudi Arabia many times to gain knowledge and expertise by participating in many exhibitions and collaborating with experts across the globe.

His early achievements include setting up a Raymond Mill in Lahore, Pakistan by International Combustion Derbyshire, United Kingdom, and later ATP by Alpine Hosokawa, Germany.

Furthermore, initiated a Marble Mine in Muzaffarabad, Azad Jammu & Kashmir in 2007 and was the first one to start a coating mill for Calcium Carbonate in 2010. Shaheen Group is the major group of marble processing for various industries as Paints, Paper, Artificial Leather, Cables, and PVC Pipe industry. He has also received the Businessman of the Year Award in 2012. Ch. Iftikhar Bashir is the former Senior Vice Chairman of LTIA and former Chairman of Lahore Township Industries Association (LTIA). He is the President of the Pakistan Grinding Mills Association (PGMA). Former President Defense Raiwind Road Association Industrial Association (DRIBA) Former Board Member Lahore Chamber of Commerce and Industry (LCCI)

Being a socially responsible individual, he is a member of MJF Lions Club and is a trustee of, “Subhan, the helper Trust” and a contributory member over various other platforms for which he was awarded another award of recognition by the President of Pakistan for his social work. Belonging to the Arain community he has made remarkable contributions on the platform anjuman-e-arain where he holds the status of senior vice president. Last but not least he is a Board Member Governor Punjab Social Welfare Committee (SWC) and amid his efforts, his name has been added on the wall of Covid-19 heroes in Governor House Lahore.

“The man who does not work for the love of work but only for money is likely to neither make money nor find much fun in life.” – Charles M. Schwab.

Mr. Haji Chaudhry Bashir Ahmad a true visionary, driven by his passion and determined towards his goal set up one of the earliest grinding mills in Lahore, Pakistan in 1966. He had his interest vested in chemicals since a young age which led him to develop constructive relationships with Chemistry and Geology professors from the University of Punjab. Equipped with the appropriate knowledge on minerals and fillers he visited the potential mines and educated the local community regarding the potential benefits in the initiation of mining minerals in Pakistan. Therefore, it is safe to say that he has played the role of Grand Father in the grinding industry.

Mr. Haji Chaudhry Bashir Ahmad was inspired by the grand legendary poet Allama Muhammad Iqbal after meeting him (add hyperlink to google page of Allama Iqbal) and named the company after his truly motivating and influential poems regarding Shaheen. (Eagle)